Glasgow Airport or Glasgow International Airport is located 1.8 miles west of the city centre of Glasgow in Scotland. Glasgow Airport is the busiest of the three main international airports in Scotland and, along with the airports of Aberdeen, Edinburgh, London-Gatwick, London-Heathrow, London-Stansted and Southampton belongs to the BAA. Flights from Glasgow to London are operated to all major London airports. The most popular routes from the airport are flights from Glasgow to New York, Paris or Tenerife for example. In recent years a number of popular charter and scheduled airlines have increasingly operated flights from Glasgow airport to top holiday destinations and the airport has become a base for low-cost and scheduled airlines such as Easyjet, Flybe and Thomas Cook. 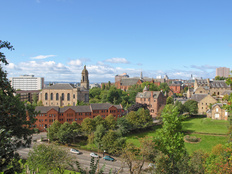