Frankfurt Airport is the largest German airport and also its own separate district of Frankfurt am Main. For decades Frankfurt airport has not only been one of the most important aviation hubs in mainland Europe, but even worldwide. By annual passenger volume, it is the third largest passenger airport in Europe after London-Heathrow and Paris-Charles de Gaulle. [More]

Plans by the airport company Fraport AG provide for substantial investment in the airport’s infrastructure in order to cope with the future growth in traffic and also to maintain competitiveness. These include the construction of a A380 hangar. The first phase of construction was completed in 2008. A new 2,800 m long runway is to be built in the northwest of the airport, which will be taken into operation in time for the winter flight schedule in 2011. Terminal 3 is expected to be opened in 2018. Reason for the plans is the expected growth in traffic per year from currently 490,000 to about 700,000 in 2010.

There are also plans to expand the Cargocity area by 27 hectares. At the same time, a new district will be created by 2016 - Gateway Gardens. Besides offices, conference and exhibition centres, the area will also inlcude catering, retail and leisure facilities. These will be close to the ICE railway station and have their own S-Bahn. The largest industrial park is being planned in the Mönchhof Gelände, and this will also have a direct transport link to the airport as well as space for the airline companies. 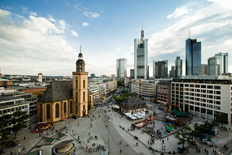