The distance from the airport to the centre of El Prat de Llobregat is 15 km, which is about 9 miles. Cheap flights to Barcelona are operated by many low-cost airlines such as Easyjet and Ryanair from major European cities such as Berlin, London and Leeds Bradford.

There are two terminals at Barcelona airport: terminal 1 is the newest terminal and was opened in 2009, terminal 2 has been increasingly used by low-cost airlines in recent years. The top two airlines using Barcelona airport in 2010 were Vueling Airlines and Easyjet with Ryanair also expanding its network in 2012. Besides charter, scheduled, seasonal and low-cost flights, the airport is also used by a number of cargo airlines. 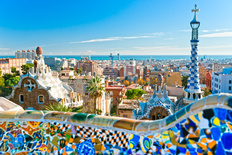